For this part, you are allowed 30 mimites to write an essay based on the graph below. You should start your essay with a brief description of the graph and comment on China’s achievements in urbanization. You should write at least 150 words but no more than 200 words. 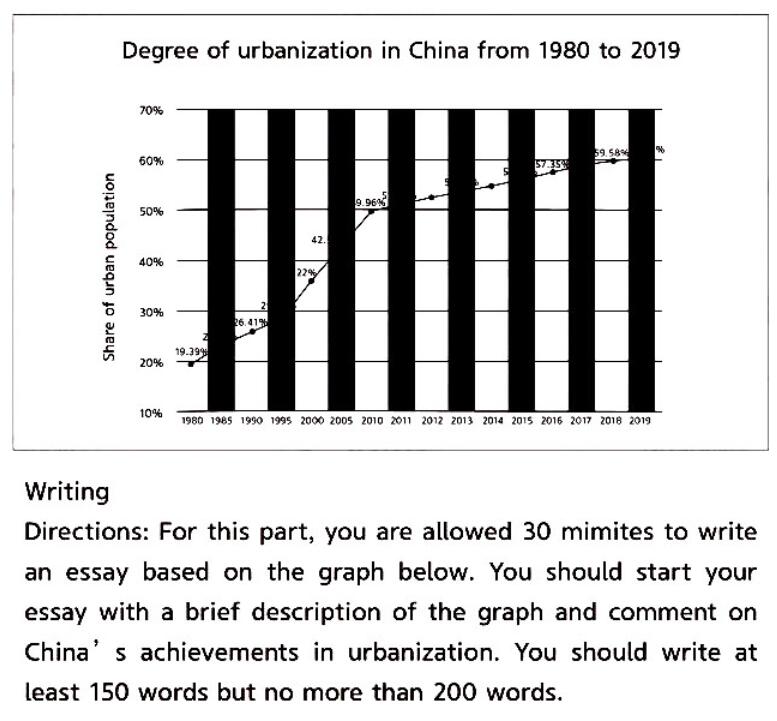 The chart above displays the progress of urbanization in China over the last four decades. We can see that, in less than 40 years, the number of people in China who lived in cities had more than tripled. From 1980 to 2010, the share of urban population had grown from 19.39% to 49.96%, which was a record high worldwide.

As far as I am concerned, China’s extraordinary urbanization has gone hand-in-hand with its economic boom. Since its reform and opening-up in 1978, China’s economy has taken off. During the past four decades, China underwent vast changes to its economic system and abundant opportunities emerged in the coastal area. As a result, people living in the rural areas came to big cities in the costal area to pursuit a better life, which speeded up the progress of urbanization.

Urbanization, in return, contributes to the development of China’s fast-growing economy. Take, for example, the basic infrastructures in big cities. The government has invested a lot of money in buildings and facilities, which enables people to live and work in high-density in tall buildings, which greatly improvs efficiency and productivity.

In conclusion, the urbanization in China not only enables people to enjoy a better living condition, but also lays foundations for sustainable economic growth. It is a great achievement and has far-reaching benefits.